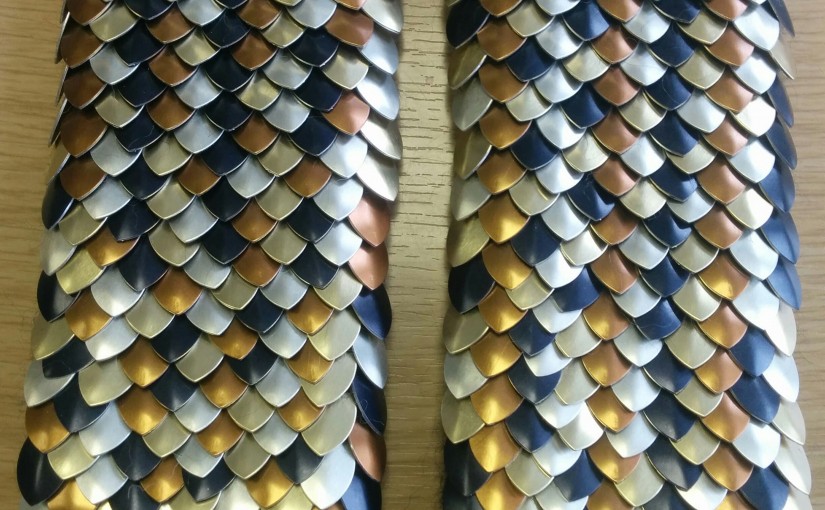 I started a new knitting project a few days ago, and I’ve been knitting to destress after my driving lessons, so I’ve whizzed through the project and finished it already. It was a really fun thing to knit, using basic garter stitch and looping metal scales into every second row to create a scale maille effect.

I was looking for a pattern on ravelry a few weeks ago and thought it would be good to try a new technique, and this jumped right out at me. I ordered four packs of small anodised aluminium scales from The Ring Lord in black, bronze, gold and champagne. The gold and champagne scales look quite similar to each other in some light conditions and quite different in others. I’d have preferred a more distinct colour difference between them, but other than that, I like how the colours go together.

I decided against doing a particular pattern and go for a random mix of colours. I wanted to avoid putting the same colours next to each other, to make sure there was a relatively even distribution and no big clumps of any one colour, so I divided the scales into two sets, one for each glove, with an equal number of each colour. Then I stacked up the scales for the first glove so I could see how many of each colour were left and try to use them evenly.

I chose a dark grey wool, Rowan’s Creative Focus Worsted, which I’ve had in my stash for a while. It’s a really nice yarn to work with, a single ply that’s very soft but not too fluffy. I keep seeing it on sale at Hobbycraft and picking up one or two balls of a colour I like, and the grey went best with the scale colours. Bright pink wouldn’t have worked very well! Knitting the scales in was really easy, and the position of scales on the row below made it clear where to start adding scales. It was a very low effort project, which I liked after the complex cable patterns on the dress I made before. The gloves are knit flat, back and forth, then seamed into a tube with a space for the thumb. I don’t like seaming, but since it’s just a small project it wasn’t such a big deal, and I think it would have been a bit awkward to knit in the round anyway.

I managed to cast off a bit too tightly on one glove, but it’s not too tight to wear, so it’s not a big deal. I really like the way the scales came out. You can’t feel them at all from the inside, the gloves are super comfortable and soft. They’re also only on the back of the glove, and the scale section is just the right width so they don’t get in the way of using your hands, but they don’t look like just a narrow strip. View this project on Ravelry.