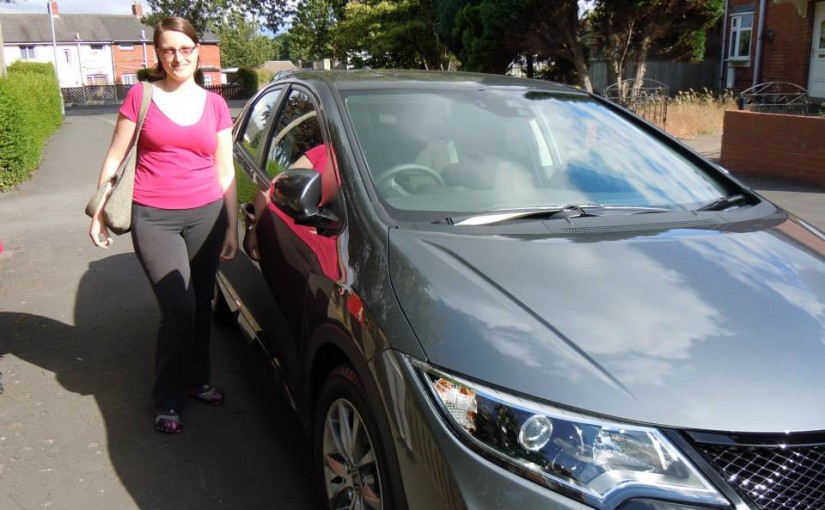 I posted about my first driving lesson back in May, and since then I have passed my driving test and I’ve been driving on my own for a while now. I was super proud to have passed first time 🙂

Feeling like a driver took me a lot longer than passing my test. Throughout my last few lessons I still felt like a learner, like I needed my instructor’s guidance, even though he wasn’t really helping me very much by that point. I was driving independently, he was just in the car with me and occasionally giving me tips and advice about driving in general rather than talking me through how to handle situations as they happened.

I was really nervous about my driving test, because I didn’t feel confident that I could drive without my instructor. It wasn’t that I didn’t know how to do it, it was that I didn’t feel like a driver, I felt like a learner. I was quite surprised that I had passed, it was like the universe saying, “See, you can totally do it by yourself.” I still wasn’t convinced.

The day after I passed my test, we went to the Honda showroom to test drive a shiny new car, and I still didn’t feel like a driver. I was very glad the salesman came with me, and I drove very slowly around the business park and left it at that. It was a pretty strange experience to be buying myself a car less than 8 weeks after my first ever driving lesson.

I picked my new car up a couple of weeks later when my new license finally arrived in the mail. I drove it home on unfamiliar roads with my other half making unhelpful comments as I stalled at every opportunity. I felt like I was starting to learn all over again. The car was different to the one I learnt in, and it took me a while to adapt and get used to it. I was still really nervous, and even more so because I was driving a brand new car.

After a bit more practise, I worked up the nerve to drive without another driver sitting in the car with me. I took my children for moral support, and was pleased with myself for being brave enough to go out “unsupervised” so to speak. We went on short trips to familiar places, sticking to roads I knew well, and my confidence grew.

The first time I drove completely on my own without any passengers was pretty unnerving. I didn’t go very far, but I had to deal with a big roundabout and a 50mph zone, so it wasn’t the easiest journey I could have picked. I was slightly surprised to find that I could manage perfectly well on my own, and that was when I began to feel like a competent driver rather than a learner.

I’ve been driving for a couple of months now, and I feel a lot more comfortable in my car. I’m still a new driver, but I feel like a driver rather than a learner 🙂