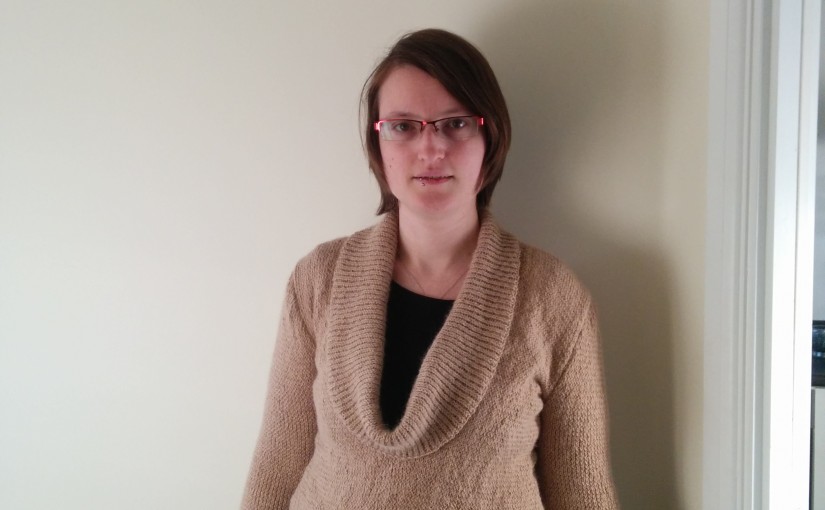 In December 2009 we moved from Toronto back to the UK. My brother and sister stayed over there, and it sucks that we live so far apart now. My sister visited the following summer, and when she left I bought some yarn to cheer myself up.

I bought 10 balls of Artesano Inca Cloud, a sport weight alpaca yarn that is lovely and soft. It came with a free pattern, and I selected the Nico sweater by Jean Moss. I had only knit one sweater before, a chunky acrylic man’s cardigan, so this would be the biggest project I’d started for myself, and the second sweater.

I started knitting the sweater right away, but I didn’t get very far, and I kept putting it aside and doing other things that seemed more important at the time. When I realised that it had been on the needles for three years, I decided it was past time I finished it, and picked it up again determined to get it done. It worked, and today I’m wearing the finished sweater 🙂

My tension was a bit wonky while knitting, so I was a bit worried about the way it would fit, but it turned out alright. It’s a little wider than I had hoped, but it’s not a big deal. Somehow I managed to knit all the purl stitches backwards. I’m not sure when I started doing this, but it has affected the texture of the sweater. The ribbed parts aren’t as stretchy as they should be, and the stocking stitch isn’t as smooth as it should be. It’s a little weird, and may have contributed to the odd tension, but it’s not really a problem.

Overall, I’m pleased with the garment, and I’m really glad that it’s finally finished so I can start on my next project. Hopefully that won’t take me quite as long!

See the sweater on Ravelry