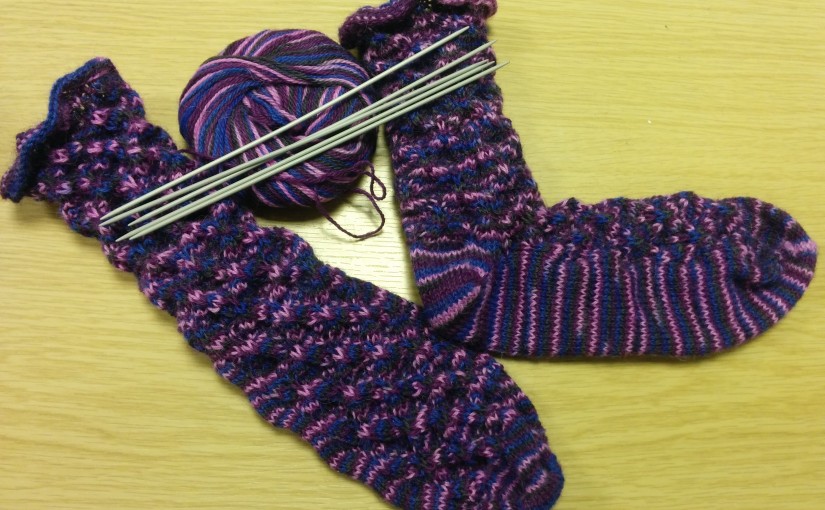 I’m not sure where I heard the idea that real knitters knit socks, but I’d been knitting for probably over a decade and had never tried to make a pair of socks before. I was curious, were they really so difficult? It was time to find out.

My friend bought me some lovely alpaca sock yarn for my birthday back in 2012 and I started knitting. I chose a toe up pattern as that meant no seaming on the toes, and a short row heel as I thought they looked the nicest. I went with Elfine’s Socks, a free pattern with a pretty lace design, with both a chart and written pattern. I prefer to knit from a written pattern, but many lace patterns only provide charts which I find frustrating.

I hadn’t done a figure 8 cast on or short rows before, but I had knit in the round and knit lace patterns many times, so the socks should have some challenges and some easy sections.

The cast on was particularly fiddly, and it took me a couple of attempts to get started without dropping stitches off any of the needles. Although the pattern called for a circular needle, I didn’t have one small enough, so I opted to knit these on double point needles instead. This added a challenge as well, the lace pattern didn’t allow for a suitable stitch distribution across the four needles, so I had to shift stitches around on several rows to allow for the increases and decreases.

One of the benefits of the toe up structure is that you can try the sock on as you go and get a great fit. I tried the first sock on every few rows to see how it was looking, and decide where to start the heel. The heel was easier than I expected it to be, short rows sound pretty difficult, but after a couple of youtube videos I was flying through them.

The foot section and leg section of socks require nothing more than regular knitting in the round, so other than the stitch distribution, these sections were easy. I did get pretty bored during the leg section on the first sock and considered making it short just to get it finished, but I persevered, took several long breaks from knitting, and eventually got it to a decent length. I found the needles made my fingers sore when I was knitting the first sock, but I must have held them slightly differently when knitting the second as it stopped bothering me.

I finally finished the second sock a few weeks short of three years after I started the project. I actually completed the second sock in a matter of weeks, so most of the time was due to avoiding finishing the first sock. I enjoyed knitting the second sock a lot more as well. Knitting with yarn as fine as sock yarn takes more patience than I was used to, as I mostly knit with worsted or chunky weight yarns before I tried the socks.

I’m glad I took the plunge and knit a pair of socks. I’m not sure that I am any more of a knitter for having completed them, but I (eventually) enjoyed working on a more fiddly project with a finer yarn than I’m used to, and I expect I will be knitting more adventurous projects like this again in the future. I do still have a sweater on the needles that I started before the socks though, so that’ll be the next thing I work on!